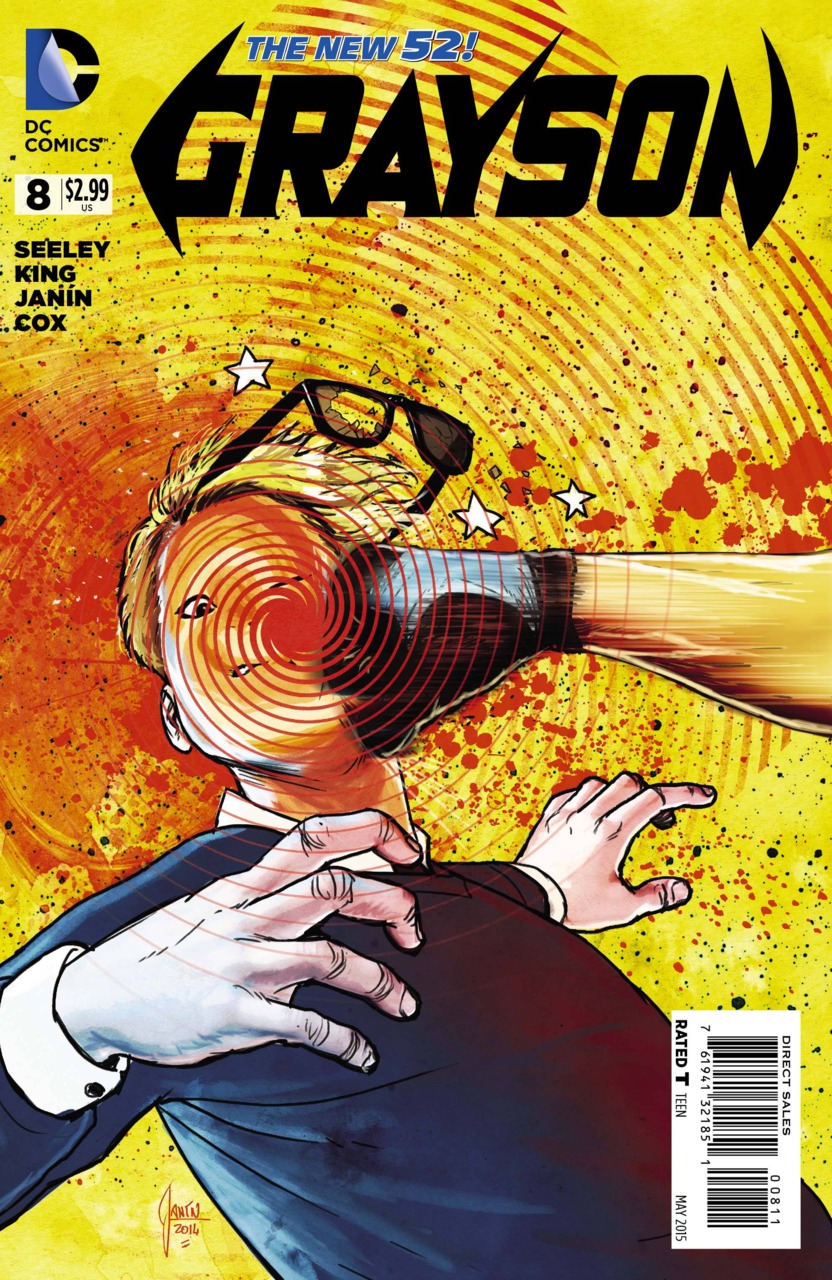 Our issue opens this month with two meetings being intercut with each other – at Spyral, Minos meets with Helena Bertinelli and discuss the identities of the various superheroes that they have managed to uncover, thanks in part to the recovery of the various Paragon pieces; in a cafe, Minos also meets with an unknown woman and discusses handing over the information of the superhero identities to her…we see him identify that reporter Clark Kent is Superman. The woman asks if Minos is afraid that Spyral will come after him because of his information leak. Cutting back to Minos and Helena, he asks to see Helena’s crossbow and she hands it over. He recalls how he once tricked her into killing a dummy made up to look like Dick Grayson (seen in “Secret Origins” #7) and how she blindly followed Spyral’s orders. He comments that it was at that point he know she would have to be first, and as he says this he shoots Helena in the chest. Cutting back to Minos in the cafe, he states that he isn’t worried about their retaliation.

Meanwhile at St Hadrians, Dick is busy teaching a group of girls in his acrobatics class…the same group of girls that were seen running after a shirtless Grayson back in issue #4. The girls discuss their instructor, but are quickly interrupted when Netz rushes in with a wounded Helena. As Dick rushes to her side, Helena gasps that she was betrayed by Minos and managed to survive because she always keeps her holstered crossbow’s sight slightly altered…he just missed her heart. As she gasps out orders, Helena manages to pull the arrow from her chest as the doctor arrives. Helena passes out and Dick begins shouting at the others to secure the students and to regain control of their communications (which Helena mentioned had been disabled by Minos). As Dick goes crashing off through a window, the girls manage to slip away and decide to head towards the chapel…the place where Helena had said Minos would be heading to eliminate Agent 1.

Cutting over to the chapel, Minos comes up behind Agent 1 but he is quickly disarmed by 1 as he attempts to figure out what Minos is after. As if on cue, a reassembled Paragon comes up behind Agent 1 and prepares to fire on his foe…however Dick rushes in and saves his fellow agent. As the two rush into battle against Paragon, Dick and Agent 1 comment about Paragon and how he has most of the powers of the Justice League…as Dick instructs Agent 1 on how to avoid each of the powers being displayed (thanks to his training from Batman), Dick manages to land a punch that knocks Paragon down. As Dick begins to wonder how to bring Paragon down permanently, he comes to the realization that it doesn’t have its heart…something they failed to recover back in issue #5. The two realize that Agent 1’s gun is behind Paragon and attempt to recover it. Paragon is suddenly distracted by the masked students…this gives enough of an opening for Dick to vault over Paragon and grab the gun. As Dick aims the gun at Paragon’s chest he shoots the monster which brings it down. As Paragon drops, Minos appears behind the assembled group…clapping and congratulating them. Minos states that he can’t be kept quiet and will reveal their secrets to the world. However an arrow suddenly pieces his chest and he drops to the ground as Helena comes up behind him.

We then cut back to the cafe where Minos is talking to the unknown woman. He reveals that he has created a duplicate of himself in order to provide the “heroes” with a “clichéd, plan-explaining villain.” The woman asks where Minos will go now that Spyral believes him dead; he states that he has a contact in Ireland and that he got the idea of faking his death from Nightwing. As the woman digs in her purse for her lipstick she asks if Minos thinks that Spyral may have manipulated him into doing what he has done. She ends up comparing Minos to other Batman villains…but instead of focusing on penguins or riddles, he likes secrets. She also comments that it is exactly that type of villain that could attract Dick Grayson to Spyral in the first place. As Minos becomes more and more agitated and afraid he quickly comes to realize who he has been meeting with – Agent Zero. As he begins to shout that the secrets he’s discovered need to be revealed, Agent Zero shoots him with the lipstick she has finally found. As Minos slumps forward, Agent Zero comments that she doesn’t care about his secrets or who he really was.

What an awesome issue! I have to say that I have been extremely impressed with “Grayson” over the last several months. In this issue we finally got a ton of clarification…even if it took me a little bit of research to understand it all.

First I wanted to discuss Paragon himself. After learning from both Dick and Minos that Paragon had somehow been able to acquire and replicate the powers of the Justice League (similar to the robot Amazo) I tried to see if this was based off of any previous characters from continuity. My findings turned up a Dr. J Cochin who first appeared in “Justice League of America” #224 back in 1984…going by the name Paragon, Cochin discovered that he was able to absorb and replicate the abilities of metahumans. Clearly our New 52 Paragon is based off of this similar character, and it can be assumed that somewhere along the lines our new Paragon faced off against the League. What can be extrapolated from this information is that Paragon absorbed the various powers into different parts of his body – Superman’s freezing breath into his throat/mouth, Martian Manhunter’s telepathy into his brain etc. As we have seen, Minos and Spyral have been dedicated to recovering these Paragon pieces every since the first issue of “Grayson” so it can also be assumed that Paragon was defeated at some point and his body was disassembled and scattered around the world. I really enjoyed Dick’s commentary throughout the fight on how to defeat the various powers of the JLA…it really shows how prepared Batman is to potentially fight against his allies.

The flow of this issue was rather quickly paced and easy to read…it kept me glued to the pages and interested throughout the story – especially when they kept cutting back to this mysterious meeting between Minos and the unknown Agent Zero. As for the identity of Zero, I can only wonder if they will be drawing upon the information that Grant Morrison gave us back in “Batman Incorporated” – could this unknown woman be Kathy Kane who we saw kill Talia??? Guess we will need to see if my guess is correct.

Overall this was an excellent issue and an extremely intriguing read.