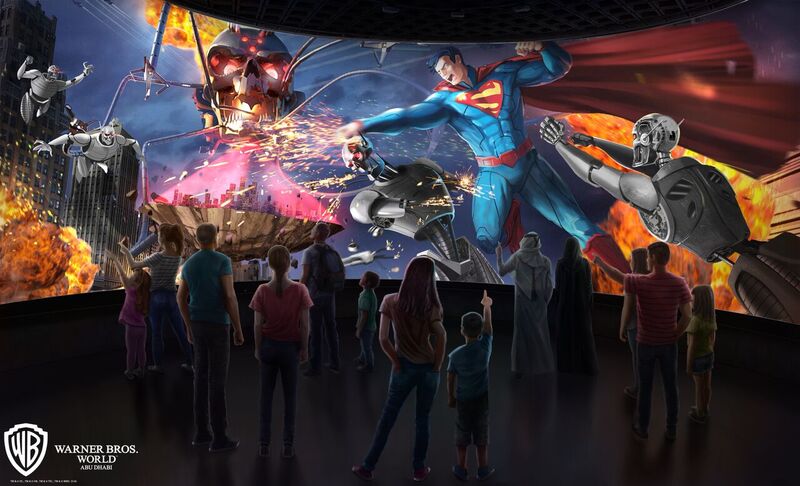 For the Batman fan who also loves theme parks, this piece of news is for you. DC Comics has provided new information on Warner Bros. World Abu Dhabi, the new indoor theme park coming to Yas Island this summer. Originally announced in 2016, the park is divided into six “lands” based on Warner Bros. properties like the Looney Toons and DC Comics. One such land being opened is Gotham City, which, as you can guess, focuses on The Batman Universe. But the new details that emerged today have to do with the Metropolis area of the park. Taking a cue from the comics and animated series that label Metropolis as the “world of tomorrow” the land will feature several high-tech attractions to thrill guests. First up will be Superman 360: Battle for Metropolis, which features a battle between Superman and some yet unknown villains. Also present in the land will be the Hall of Justice which will feature a ride called Justice League: Warworld Attacks. Rounding out the attractions are Green Lantern: Galactic Odyssey, a 4D experience, and Teen Titans Training Academy, a play area with a zip line and other physical activities for young heroes in training.

If you’re not a fan of rides but instead want some merchandise, Metropolis will also be home to Zatanna Books & Magical Curiosities and Justice League Hero Supply which should have plenty of DC Comics-related products to take home. Guests can also dine at two themed restaurants, Ace O’ Clubs, Bibbo Bibbowski’s quick service restaurant or Park Ridge Market.

Will you be planning a vacation to the Metropolis and Gotham City of Warner Bros. World? And can any ride compete with Six Flags Great America’s classic Batman roller coaster? Let us know in the comments below