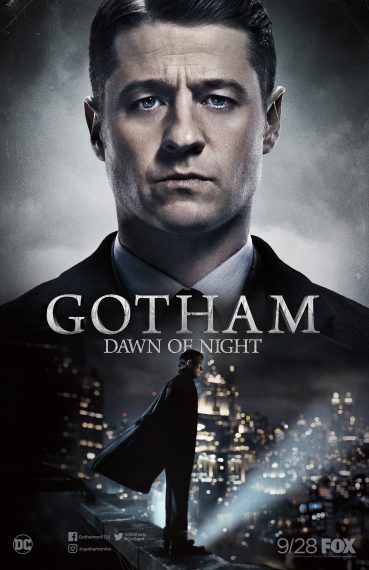 If a newly released poster from Fox by TVInsider is any indication, Season 4 of Gotham is about to take one giant rooftop leap forward in the Batman mythos. Available to SDCC attendees, this poster places our not a boy, not yet a man, Bruce Wayne (David Mazouz) in a very familiar position, perched high above Gotham. Cleverly, Bruce is wearing a long coat that has been caught flapping in the wind at such an angle that it invokes the character’s iconic cape. What a coincidence! Perhaps most interesting about the poster is not even Bruce Wayne himself, but rather the stone-faced Jim Gordon (Ben McKenzie) taking up the top half. Is it just an example of featuring the series lead, or should we infer that perhaps that mantle is about to be taken from Gordon and placed on Wayne? I’m sure we’ll learn more at SDCC this weekend.

Gotham’s 4th season will premiere on September 28th on FOX. Now why couldn’t they have had a bat or two stylishly hint at Jim Gordon’s most iconic look, his mustache?